1920×1080 (16:9 or 1:1,77) is a HD video standard but unfortunately not a standard in cinema. Although it is technically possible to produce a DCP in HD format, this is not recommended. While films in Flat or Scope format are correctly masked, films in HD format will be projected within the Flat image space. It is important to take into account the fact that in some cinemas, where the projector is positioned very high, the black bars next to the image will become black triangles. One should also keep in mind that keystoning is not possible in digital cinema. To avoid these effects consider cropping your movie to 1:1,85.

According to DCI 24 (and 48) frames per second (fps) is the standard, but 25 or 30 fps will also work on all newer versions of servers which support the SMPTE standard. Higher speeds then 48 fps is not available for all playout servers. Please note that 29.97 and 23,98 are not possible. Material with this speed will be converted to 30 or 24 fps.

A movie theater is by default equipped with 5.1 or 7.1 audio, where most of the speech goes through a center channel. Prologic decoding is not standard when showing DCP. When a DCP with only 2 channels is shown, anyone who is not seated in the centre of the room will only hear the left or right speaker. 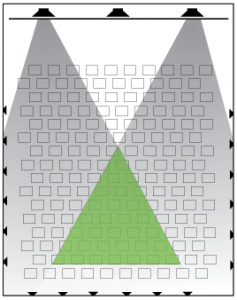 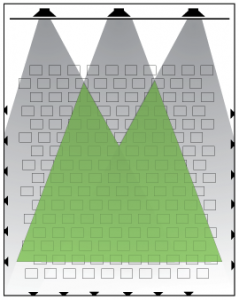 To avoid that, Green DCP will always upmix towards 3.1 (Left, Centre, Right, LFE) with DTS-licenced software when you provide your film with mono or stereo tracks. This upmix will be delivered with the DCP as a standard 5.1 mix with muted surrounds. As an alternative you can supply your own 5.1, 7.1 or 3.1 mix.

It’s possible to add multiple subtitle tracks to a DCP. So one package can contain several subtitles, targeting different language regions. When the original DCP is still available, a supplemental package with a new subtitle can be added later. The original picture and audio will then be merged in the playout server with the additional subtitle track.
For subtitling we need a timed text document (.stl/.srt/.pac or similar) which is identical in timing and speed with the picture and sound.